It’s hard to tell some days, but summer is officially here. In Scotland that often means warmer rain rather than sunshine… but whenever you do get out in the garden you might have noticed that a little rain doesn’t deter the insects… and one unwelcome visitor you might have seen already is a wasp.

Queen wasps start building a nest when they emerge from hibernation. Usually, the nest site is situated somewhere outdoors, perhaps under a sheltered eave; but if they can gain access to your home then wasps will happily nest in your wall cavities or roof spaces, either inside your home or your garage.

By summer then the nest can contain thousands of wasps, and if you are seeing them in your garden in high numbers there is likely to be a nest nearby.

To locate your problem nest, carefully watch the flight path of any returning wasps. (This becomes easier as their numbers increase over the summer months.) Nests have distinctive papery walls, as they are made from chewed wood pulp and wasp saliva.

How big can a Wasp Nest be?

When a Queen wasp starts to build a nest it will be about the size of a golf ball, but they grow rapidly as the number of wasps inside increases. A nest in the summer can easily be the size of a football, but it may be even bigger.

In the UK, the Common Wasp and German Wasp cause us the most problems, and both can give painful stings – although it’s only the female wasps that will sting you. But unlike bees, they can and do sting multiple times.

If you are stung

First, wash the sting area with soap and water to remove as much of the venom as possible then apply a cold pack to the wound site to reduce swelling and pain.

Keep the wound clean and dry to prevent infection and cover with a bandage if desired.  For more help NHS24

6 ways to identify a wasp 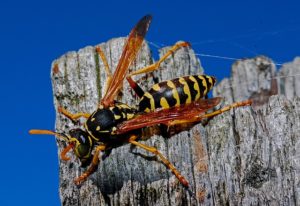 What not to do

If you see or suspect a wasp nest in your home you should not attempt to treat it if you are sensitive to stings. If you disturb a nest, the wasps inside will attack and sting you as a form of defence. That’s why it pays to call in the experts.

Our wasp control services are in high demand during the summer.

Last summer we were called out to remove a nest from a compost heap in Cupar after a lady’s guide dog was stung.  In another instance, we removed a nest in Kinross from the covered top part of a child’s slide, thankfully before anyone was hurt – but do be careful when removing winter covers from garden equipment.

We’ve also used wasp control in Glenrothes to help save a birthday party. The wasp nest there was in an air-brick of the house, and the resident wasps invited themselves to the party!

We know we’ll be called out many times this year, and if its your garden or home that needs protected rest assured we’ll be there quickly and waste no time in getting your home and garden wasp-free so that you can enjoy the sunshine – if and when it makes an appearance.