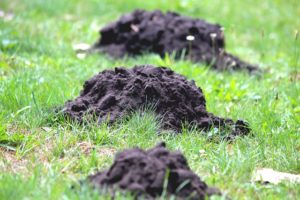 Molehills can be costly as well as unsightly, and not just for farmers and groundkeepers. This problem often surfaces in the Spring, (sorry–that pun was a bit forced), and you might be reading this because one has just popped up in your garden.

Your knowledge of moles might be rooted in the character from Wind in the Willows? But don’t be too sympathetic. The one thing Kenneth Grahame got right was Mole’s contentment in living alone. That’s because moles do tend to be solitary creatures for most of the year; but when they breed, between February and June, there can be up to seven moles in eachlitter.

The young will be ready to leave the litter within about five weeks, but in that short space of time the increased activity in and around the burrow can create quite an impact. Young won’t travel too far, and with animals in the wild typically living for three years, a single mole hill this spring can signal the start of a much larger problem lying in store next year.

Moles might not look as unpleasant as a rat, and your first instinct might be to live and let live; but their impact can be a health risk as well as unsightly.

One recent mole infestation we were asked to deal with was because the mole activities were undermining fields in which livestock were grazing and horses were being trained. It had become a high-risk situation for both the animals and their handlers… as mole tunnels can collapse and cause
ligament damage or sprained ankles.

We’ve all walked across rough ground at some point and felt our heel twist, so you can imagine the ground underfoot giving way by several inches and the serious injuries that could result for both animals and humans. For humans it could pass in a few weeks after a trip to the GP or hospital – inconvenient but not life threatening – but for horses and livestock a broken ankle is a far more serious injury, so it is always essential to treat any infestation quickly.

The most humane way to deal with moles is to use animal traps that are placed expertly. Other than trap setting, the main way to control an infestation is aluminium phosphide gas; but that can only be used by a fully trained operative – like Active Pest Solutions. (Shameless plug over.)  It does pose a risk to pets, so don’t please try to cut corners.

There’s little you can do to make your garden unattractive to moles. If the ground is wet then the tunnels will come close to the surface; so where you’re in control don’t overwater the lawn!

They eat bugs and grubs, so planting particular plants won’t make a real difference either.

If you have a molehill or two and want to prevent it from becoming a big problem in the not-too-distant future, call us now for professional advice and help. We’re registered with Fife Trusted Traders so you can confident in our service

Jenni Wilson
Flea control – How to handle the problem Have Pigeons Moved In Under Your Solar Panels?
Scroll to top