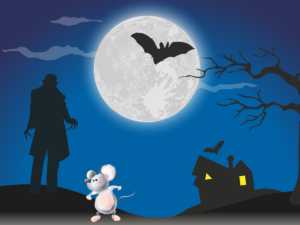 The Victorian author of Dracula made sure we all know that the best way to keep the Count at bay is to leave garlic at the entrance to our room – every self-respecting vampire hates the stuff. Could this seemingly mighty vegetable really have the power to deter vermin and avoid a mice infestation

The answer is yes, but they’re vermin of a slightly less life-threatening type.

Mice (and rats) are apparently the carriers of more than 35 diseases – everything from Lyme disease to plague. They won’t suck your blood and turn you into the eternally damned living dead, but as a direct result of their moving into your home they could quickly lead to you becoming genuinely ill– but garlic really could save the day.

If you’ve seen a mouse and found a small hole in a floorboard or skirting, chances are that’s where they enter and exit. Place garlic powder next to the entrance and you’re unlikely to see the mouse again – they hate the smell.

In fact, if you’ve seen the mouse, chances are there’s more than one and it’s a wise move to call in the experts. Us.

But if you’ve only seen evidence that they might be around, such as boxes or other soft food containers that seem to have been gnawed at, or mouse droppings near your house, then these other seemingly unlikely remedies could just provide a humane yet effective way to stop a random visitor becoming a regular nuisance.

Garlic powder works because mice have a strong sense of smell, and just like us some smells attract them while others make them turn on their heels and head for the neighbour’s kitchen instead.

As well as garlic you can try a range of other ingredients as repellants. Herbs and spices with strong or pungent smells can be particularly effective: try cayenne pepper, which is just as likely to bring tears to a mouse’s eyes as your own. To be effective, sprinkle the spice in areas where mice seem to have been.

You can also make a spray:  take a few drops of dish detergent, a tablespoon of vegetable oil and 1 or 2 tablespoons of powdered cayenne pepper (chilli powder or dried peppers are also effective) and dilute with water. Warning, don’t spray this near your own unprotected eyes, or rub your eyes after touching the spray!

Cinnamon also has a strong spicy aroma that mice hate, so leaving a cinnamon stick near their entrance point can be just as effective as the garlic. Cloves are another good option (choose one of these ingredients to try, don’t try and mix them all or you’ll have yourself running from the house too). You can even try Tea Tree oil.

If you’d like a few more ingredients for your anti-rodent ratatouille, try the sweet smell of mint or peppermint; while this is one we generally like, the mice don’t agree, to them mint is positively noxious.

Deterrence can be the best form of defence, so remember, keep the ingredients indoors: don’t store food in your garage, we guarantee it’s much easier for the mice to access than your kitchen, and then the mice will sit back and allow you to bring the tarnished food into your own kitchen.

If you do see any small gaps in skirting or floorboards, try plugging them with steel wool – even a mouse can’t gnaw through steel.

Jenni Wilson
Have Pigeons Moved In Under Your Solar Panels? 12 must-knows for vermin proofing caravans or motorhomes
Scroll to top